End of November in a Productronica year means only one thing…..e-mailing potential leads and following conversations with customers and distributors.
This year’s show yielded three interesting observations. First….undeniable evidence of global warming, no coat, no scarf, no gloves and people sitting outside in the evening as the days reached a barmy 18°C.
Second was the continued interest in direct image soldermask and LED white soldermasks, both for conventional exposing and direct image.
The final observation was the amount of solid leads and quality attendees at this year’s show. I for one feel quality is better than quantity at trade shows and this year’s Productronica did not disappoint.

All in all I feel this year was a good one for Electra and Productronica, with continued interest in some of our key development areas, namely DI and LED soldermasks, but also the buzz created from the very exciting announcement of a joint development agreement between Electra and Agfa for Inkjet PCB Soldermask. 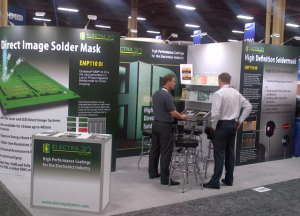 So here we are in July, Midsummer’s day has only just passed and already plans are underway for the 2016 IPC show. Booth selection is done; a slightly better lottery draw means we had a wider choice this year. Opted for Booth #716, a highly desirable 20 x 10ft with central location.

Slightly different location for the 2016 show, instead of the familiar Mandalay Bay, we are now at the Las Vegas Convention Center. Mixed feelings about the move, although confident it will make little difference to the show attendance I do foresee people may be spread further afield come the evenings. Nevertheless, let’s face it, spending a week in Vegas during March is not something to complain about.

Next up is getting everything finalised for Productronica. Munich 10-13th November 2015.

This website uses cookies to improve your experience while you navigate through the website. Out of these, the cookies that are categorized as necessary are stored on your browser as they are essential for the working of basic functionalities of the website. We also use third-party cookies that help us analyze and understand how you use this website. These cookies will be stored in your browser only with your consent. You also have the option to opt-out of these cookies. But opting out of some of these cookies may affect your browsing experience.
Necessary Always Enabled
Necessary cookies are absolutely essential for the website to function properly. This category only includes cookies that ensures basic functionalities and security features of the website. These cookies do not store any personal information.
Non-necessary
Any cookies that may not be particularly necessary for the website to function and is used specifically to collect user personal data via analytics, ads, other embedded contents are termed as non-necessary cookies. It is mandatory to procure user consent prior to running these cookies on your website.
SAVE & ACCEPT